They are sexy and they are magical.

These are the ladies that decided to quit their role as the magician’s assistant to be the magician.

I did a Google search and found 2 beautiful magicians staring back at me from the screen.

“Magic Babe” Ning is no surprise to many of us magicians. “Magic Babe” Ning is known as Singapore’s only professional female magician & escape artist. Unfortunately all good things must come to an end, the third website on Google is an article from TODAYonline about ‘Magic Babe’ Ning retirement from magic. We will sure miss her! The last we heard from ‘Magic Babe’ Ning was that she’s an author of 2 books (“Who is Magic Babe Ning?” and “Adventures of 2 Girls”) and was recently married (sorry guys). Who is ‘Magic Babe’ Ning beloved life partner still remains a mystery to many.

Second website after ‘Magic Babe’ Ning is S&MMM. When one door closes another one opens. Although nothing much has been mentioned and we are left with only a teaser that links to their Facebook page (https://www.facebook.com/smmmagic); it seems like Singapore’s entertainment scene have 4 more Female Magicians.

Until their next update. Here are some of the things we know about S&MMM.

If you have any information on S&MMM, do let us know!

The easiest way to best categories Hypnosis is into 2 parts: 1) Clinical Hypnosis and 2) Entertainment Hypnosis.

In comparison to Clinical Hypnosis is Entertainment Hypnosis (a.k.a. Stage Hypnosis) and no it doesn’t involve a swinging pocket watch. It is in fact much more challenging and will require a professional hypnotist with experience. During the performance the hypnotist will need to be mindful of the entertainment segments and the well-being of the participants. If not handled professionally, participants may hurt themselves or in rare cases suffer prolong effects of hypnotic stress (epileptic seizure, paradoxical laughter, pseudobulbar affect and etc).

The use of hypnosis during the earlier days weren’t so sunny. In the 1950s, the CIA funded a top secret illegal mind control project with its code name known to be as MK Ultra. Hypnosis along with drugs (LSD, amphetamine, etc) and other methods were used during the experiment to manipulate the minds of their human test subjects. Hence, it possible that the term Speed Hypnosis (Speed is the street name for amphetamine) was coined in relations to MK Ultra and to describe a quick hypnosis technique. Speed Hypnosis was later known as Rapid Hypnosis to break away from its dark history. Other terms to describe quick hypnosis technique were later used to commercialized by hypnosis coaches.

In Episode 4, Alvin Terence lead his participants into a trance-like state in heightened focus and concentration. While in a trance like state, participants were put into several state such as catatonic (immobile), mutism (unable to talk), amnesia (lost of memory) and confabulation (having memories of the wrong information).

So how was it done? We can all generalize the technique as Hypnosis but to be specific, the psychological technique used in the video was PWA or Perception Without Awareness.

In short, PWA is a manipulation technique to control either by manipulating the stimulus conditions or by instructing observers on how to distribute their attention. For an example, if someone whistles at you from a distance maybe because you were distracted or focused on something else, your brain stores that action (whistles) and response to it at a much later timing when that distracted is removed. Thus, causing your mind to either have to urge to whistle or hum to a melody.

At the 7.12 minute of Episode 4, a red arrow have been conveniently used to point out a physical touch stimulus to influence the participant. The sense of touch is located in the skin. It comprises of three layers, starting from the surface to the inner: the epidermis, dermis, and hypodermis. Different types of sensory receptors, varying in size, shape, number, and distribution within the skin, are responsible for relaying information about pressure, temperature, and pain. Pacinian Corpuscle is the largest touch sensor located in the hypodermis, the innermost thick fatty layer of skin, which responds to vibration.

Between 5.09 min to 6.01 min, Alvin Terence distracted the participant with several hand gestures while at the same time implanting the new name “Sharon” by writing “Sharon” behind the right shoulder.

Unbelievable? Let’s try this out. Invite your friend to try a simple experiment and follow the instructions below:

1) Instruct your friend to stand near you.
2) Put your own hand over your friend’s shoulder.
3) Explain to your friend that you’re going to try an experiment. “Hey, have you heard of PWA or Perception Without Awareness? It’s a cool psychological theory which describes how we are being influenced by our surroundings. I would like to see if this theory is true.”
4) While explaining in Step 3, start to draw circles with your ring finger behind your friend’s back while at the same time rock their body. Please note to use the ring finger (4th finger) as it is the weakest finger and doesn’t being much attention to the drawing. The rocking of body helps make the drawing less suspicious.
5) List down a couple of shapes and get your friend to select a shape. “I want you to select one of this shapes: triangle, circle and square. Which one will it be?”

Did it work? We will like to hear your experience by leaving us your comment here: https://www.youtube.com/watch?v=3gOF41aNDN0

For more unrevealed techniques of Psychic: Season 1, be sure to check out the DVD under the ‘Online Store’ section on our official website, http://www.MagicATOM.com/psychic.

We have seen it on TV and in the movies but what is “Time Traveling”? According to Professor Brian Cox, he believes in the “Twin Paradox” experiment. Prof. Cox further elaborate that “if you go fast your clock runs slow relative to people who are still. As you approach the speed of light your clock runs so slow that you could come back 10,000 years in the future.”

Imagine twins, one stays on Earth (Twin A) while the other (Twin B) boards a spaceship and flies off at relativistic speeds. Compared with Twin A’s timeframe, Twin B’s timeframe will slow. If time is running slower for Twin B, then he/she will return to Earth where a lot more time has passed and Twin A has aged significantly more than Twin B. The mechanism behind this is “time dilation” and it has a stronger effect as you travel closer and closer to the speed of light. (Source)

With that scientific explanation, we can conclude that Time Traveling is possible… but only in theory and not Interstellar-ish. Unless you can travel at the speed of light, which is of course impossible because it takes infinite energy to accelerate an infinite mass.

In Episode 3, Alvin Terence successfully ‘Prophesied’ or (with a less supernatural theme) ‘Predicted’ random words selected by the participants. The participants were instructed to visualize pages of a dictionary flipping and then select a random word from one of the imaginary pages. Lastly, the random word was highlighted or circled. After revealing the choice of random word(s), Alvin Terence directs the attention to an envelope held by the participant at the very beginning of the experiment. Inside the envelope reveals an IKEA photo frame with their choice of word.

So how was it done? Here is one of the techniques use in Episode 3: Pinstriping Pareidolia.

Pareidolia is a psychological phenomenon involving a stimulus (an image or a sound) which is perceived as significant. Common examples of this are seeing images of animals or faces in clouds. Take a look at the cloud picture below. Do you think the cloud looks like the shape of a horse? (Source) 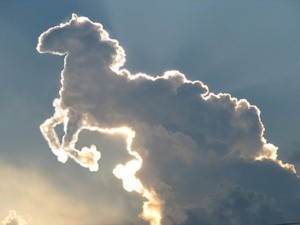 About 97% of people will agree that image will look like a horse. Maybe because it was suggested above or MAYBE because of schema (in psychology and cognitive science, a schema describes an organized pattern of thought or behavior that organizes categories of information and the relationships among them). (Source)

Pareidolia combined with Pinstriping (line art) can produce ambiguous words only imaginable by creative minds. Were you able to see the words written clearly on the photo frame or was it your mind telling you what you saw?

For more unrevealed techniques of Psychic: Season 1, be sure to check out the DVD under the ‘Online Store’ section on our official website, http://www.MagicATOM.com/psychic.

One of the important rules in magic: PRACTICE to perfect a trick.

A real magician is able to capture the minds, hearts and smiles of the audience.

As promise here is the current update of Luna Mentalist from Indonesia Mencari Bakat 2014.

The Magic Life – Documentary Trailer from Nelson Cheng on Vimeo.

Distributed by Gravitas Ventures — available on Amazon Prime and iTunes

On 6 June 2014, Singapore lost one of the most multi-talented entertainers of all time, Victor Khoo. He was 63.

Victor Khoo (Victor Khoo Kah Liang), born on 7 October 1950, passed away on 6 June 2014 from a long battle with cancer. Victor was known during the 1970s and 80s for the voice behind children’s radio show Happy Talk. In the entertainment industry, Victor was well known for his hilarious ventriloquist act and for being a successful multi-talent entertainer (magician and compere).

Astonishing Team of Mentalists (ATOM) is a team of internationally performing artistes from Asia.

Formed in 2007, the World's FIRST & ONLY multi-talented team of Psychological Illusionists (or Mentalists) has performed for the local biggest names ranging from Politicians, Celebrities and highly reputable Corporate Clients.

ATOM Official Blog aims to foster the spirit of Mentalism (the toughest sub-category of Magic) through World Magic News and ideas. It's catered for EVERYONE not just Mentalists or Magicians.

The authors contributing to this blog are members of ATOM. More information of the authors can be found on ATOM Official Website below.